The Flivver is a little boat with a lot of Florida history. It was popularized by Cypress Gardens where Corky the Clown would drive it around between acts to entertain the crowd. 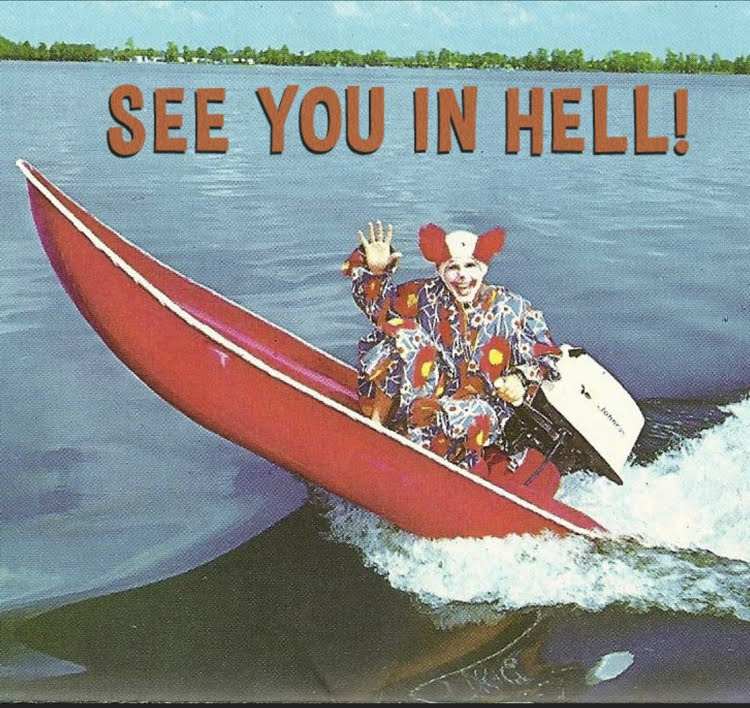 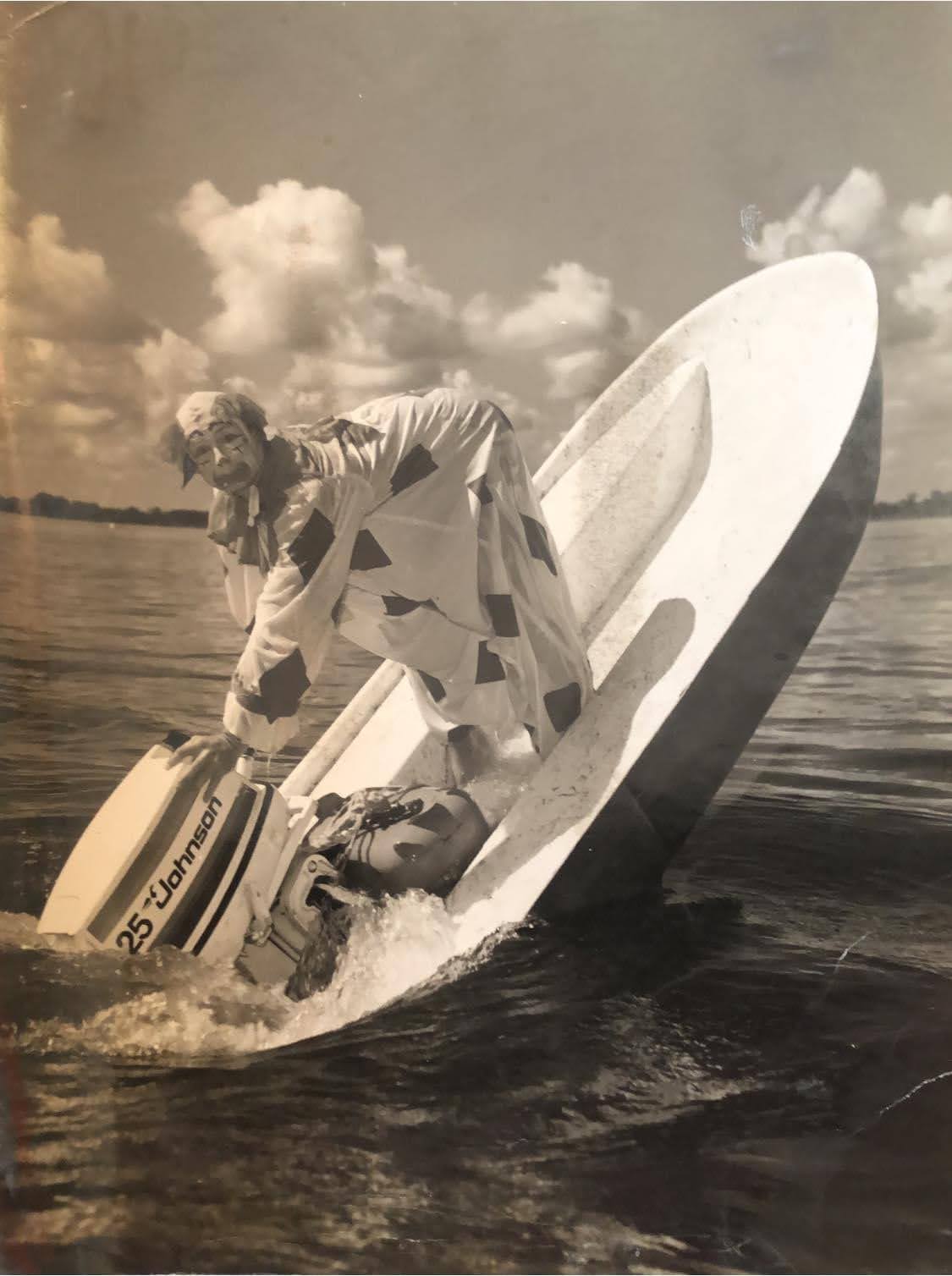 This website Creek Rat Flivvers has a ton of archival photos.

They were made by at least 4 or 5 companies over the years, in various configurations and a few lengths. The standard ones are just over 8' by 4'. I kept an eye out for one for a while, and eventually found one for free that needed a rebuild...common story among my projects! 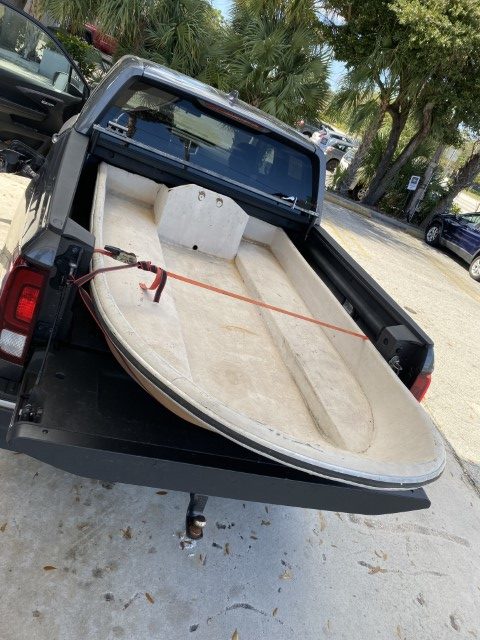 Transom was rotten, and the foam-filled benches were fairly well soaked. Had a few cracks and nicks all around. I stripped it down to a tub. 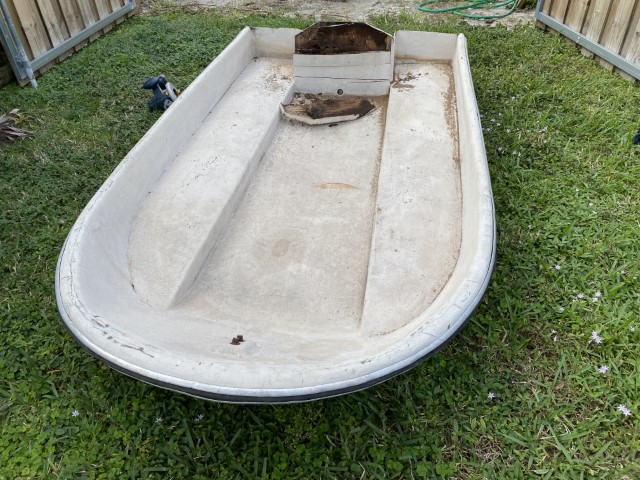 The plan was to use as much scrap materials I had around from other projects. I wanted a "casting" deck to make a little storage area and maybe do some flounder gigging, and to make similar longitudinal benches for seating & flotation.

Made the transom motorboard out of two layers of Coosa BW26. Overkill, but a friend had some extra. 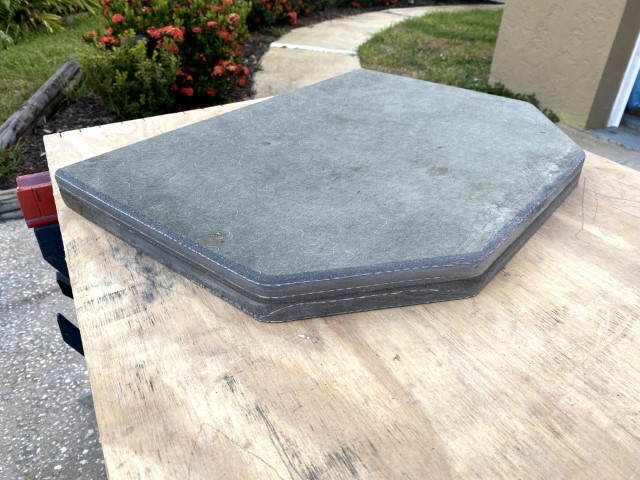 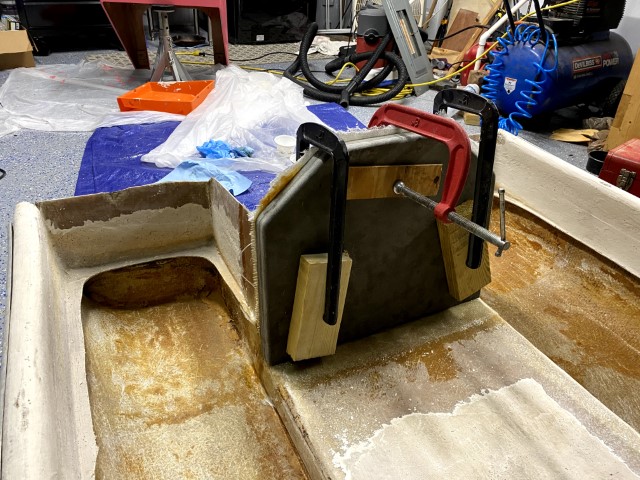 The transom looked a little low to me so I made it about 1-1/4" taller and figured to cut it down until it was right. This ended up taking 3 rounds - the sponsons really do lift the center up and the prop would slip with the engine much higher than it came.

I think the Suzuki 20 is a great match at under 100lb, but I'm about sworn off of Suzukis with my current luck. I'm low-key shopping for an older 2-stroke merc SeaPro25, or a Yamaha 40. 15" tiller manual start no trim, not easy to find. Need an inflatable racing motor.

For now I have the 6hp kicker from the DE25. Once the transom was in we put it in the creek for some trials. Wasn't sure if that engine would plane 2 adults, and wanted to set transom height. 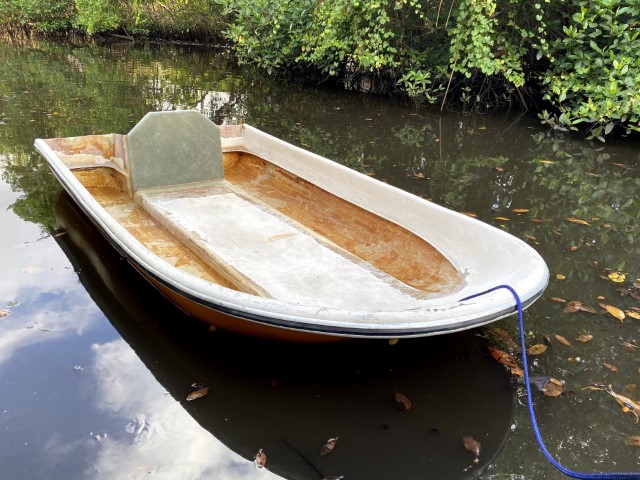 With the sponsons it floats super high, I think I could leave the plug out. Maybe even with the engine on. 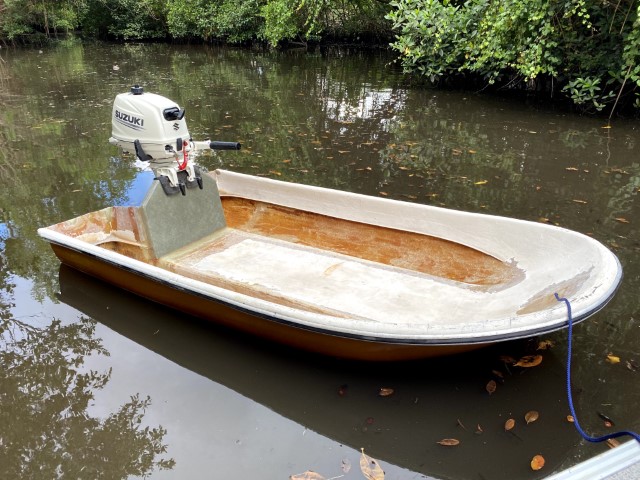 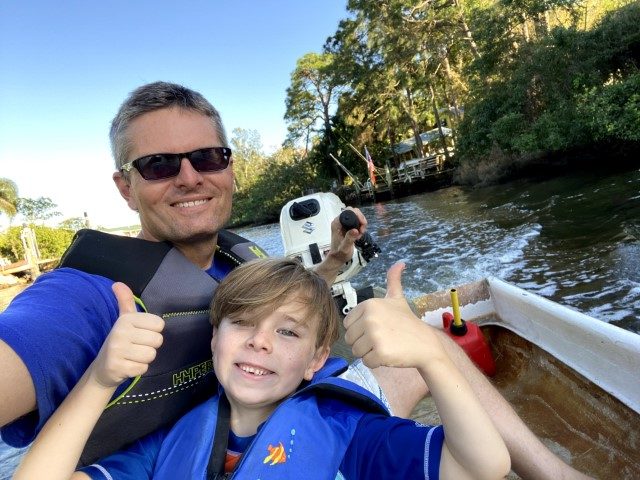 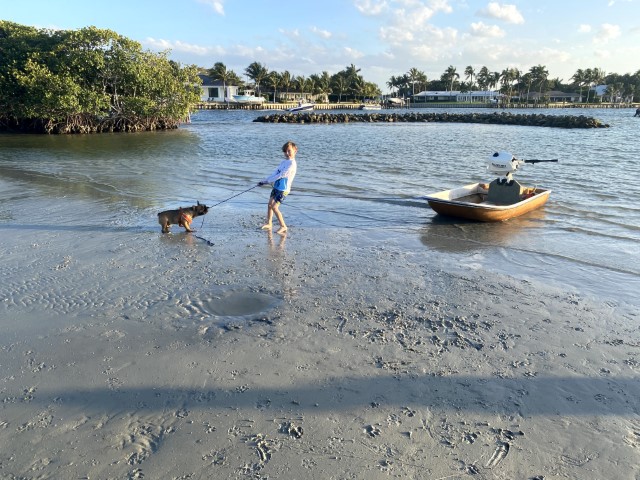 I had a pile of other projects going on (pontoon rebuild, DE updates posted elsewhere here, plus cars/house/etc) so we just played with it for a while. 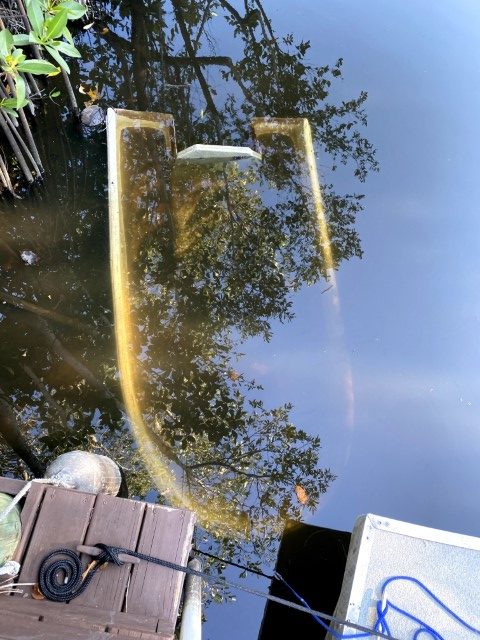 It runs about 18 with me alone, and is about as stiff as an over-cooked noodle. Marginal planing with two adults, it would sometimes get up and other times just plow around. Plenty fast with my son, and it could tow a kneeboard. I cut down the transom 3/8" at a time until it stopped cavitating.
DE25, project journals below:
DE25 Owner's Log
Pontoon Refurb
Skiff Repairs
Flivver Rebuild
Top

Started chipping away over the summer. What's nice about this thing is it is so small it just stays in the garage and I work around it, and each task is a manageable scope.

Put in a big Coosa backing plate for the bow eye, may use as a dinghy on the DE.

Bulkhead and casting deck are Corecell A500 which I had leftover from the speed boat rebuilds. Glassed both sides of bulkhead up front, and the under-side of the casting deck. 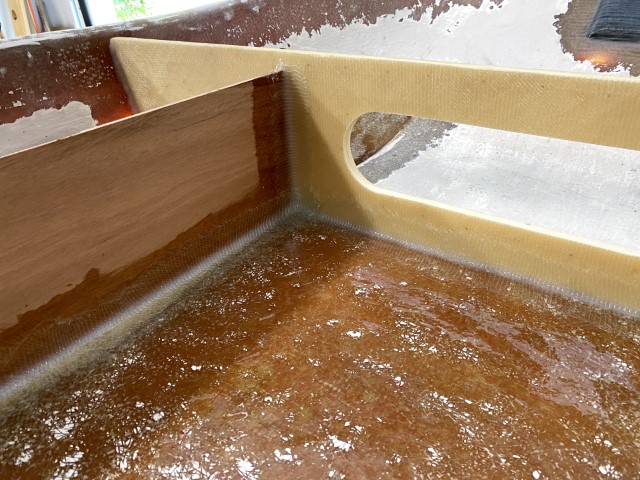 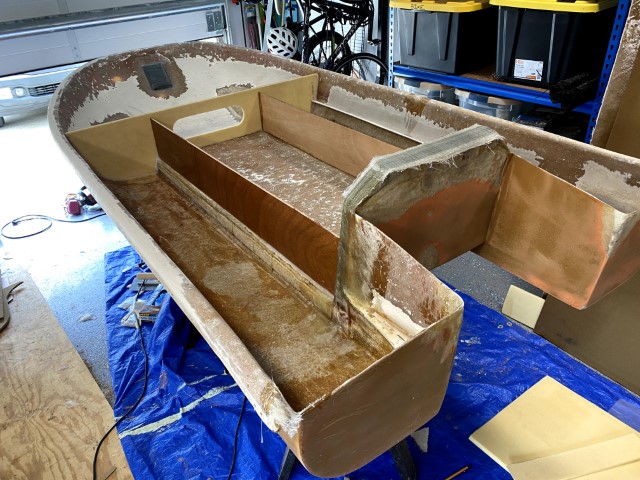 Stringer / seat sides are 1/4" Okoume, and they sit roughly on top of the inside edges of the tunnel.

The center floor portion was super floppy. They are all built like this but I wasn't happy with it; 40 yr old shell that I plan to jump waves, take big trips, and let my son loose with. So I cored the portion between the stringers with Corecell. It is perforated so you get a good indication of the bond distribution as it fills up the little holes. Works great with vacuum but I didn't bother with that here. Sat the boat down on plywood on sawhorses so the bottom was held flat and supported the weight. 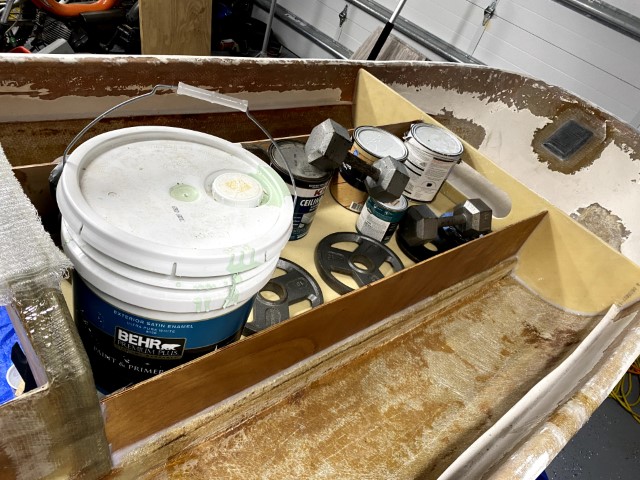 Laid in the casting deck with the glass side down. It sorta wedged itself around the perimeter, then I later filleted that and glassed the top of the deck. 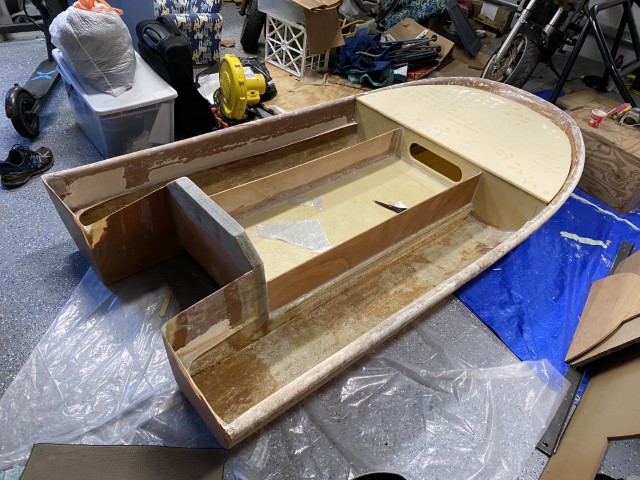 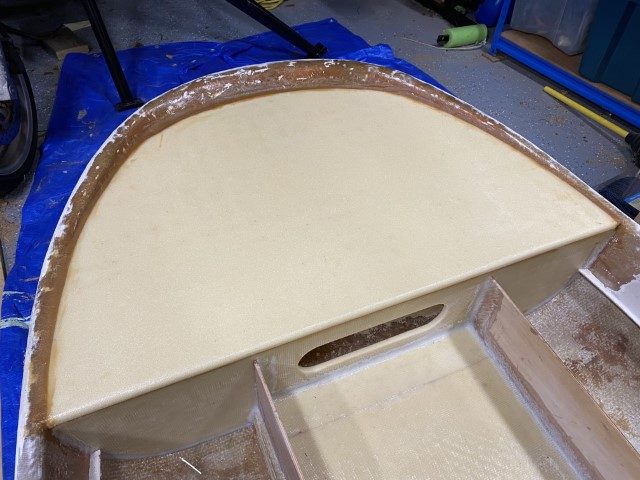 I wanted to fill in the transom extensions, if I stood in the back they would dip below the waterline. Debated a few options with friends about how to do this - didn't really want/need to core it, and the shape was twisted. I ended up spanning the area with packing tape, flipping the boat upside down, and using it as a mold. Filleted and glassed from the inside. 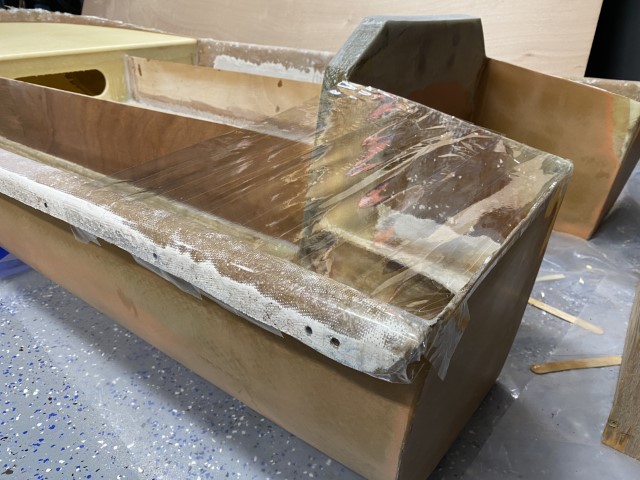 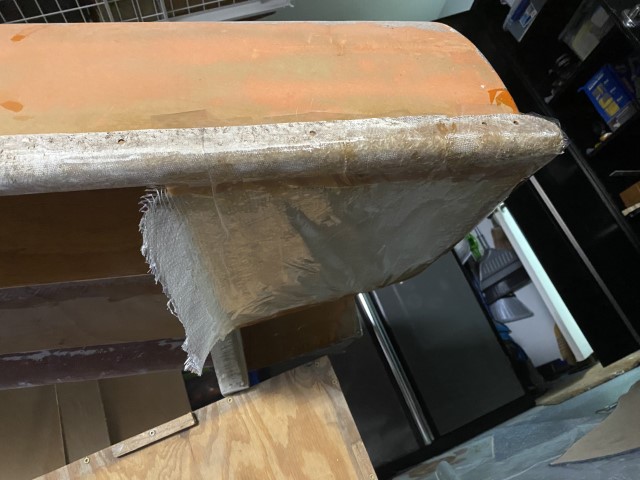 It sorta worked out as planned - had good access, and the fillets laid in nicely, but the surface ended up being pretty wavy. Gotta be the least fair surface I've ever made. Just a little work to fair and finish better later.

Made 4 little bulkheads to support the seats and close off the back area. I hot-glued a couple mini-cleats to hold the seat top in the right position to be glued in. 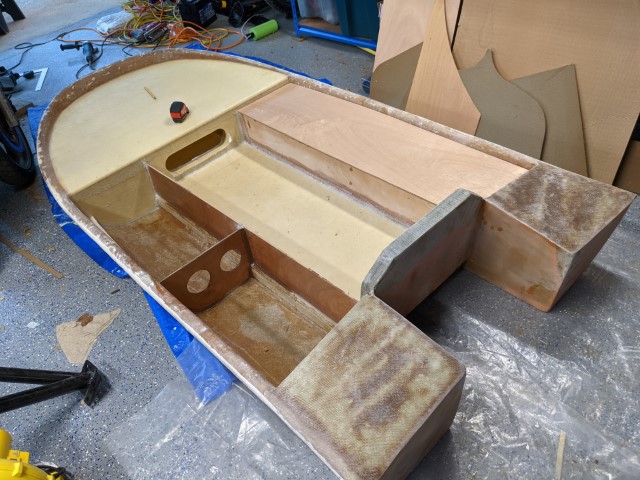 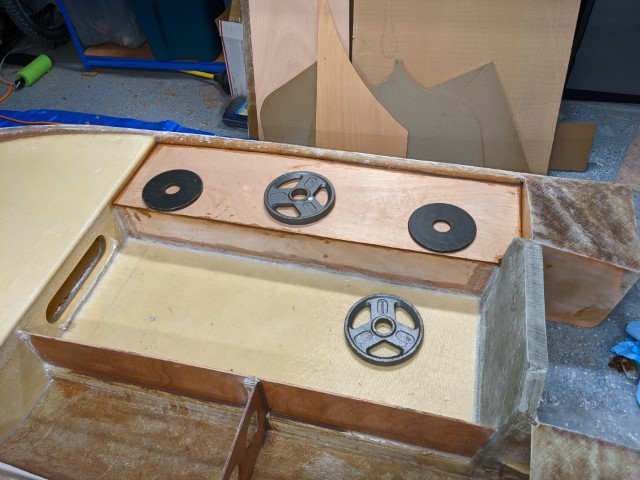 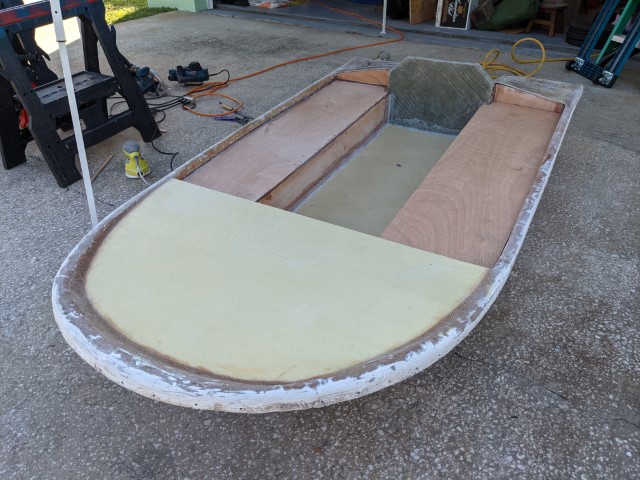 This is about where I'm at now. Almost structurally done, some glass on the seats + fillets, plugs in the sponsons, then some minimal fairing and paint.

We may be ready to play with it this weekend, then finish when there's time.
DE25, project journals below:
DE25 Owner's Log
Pontoon Refurb
Skiff Repairs
Flivver Rebuild
Top

Not much progress on the boat...I did glass the seats, and put in a plug tube, just been playing with it every once in a while. 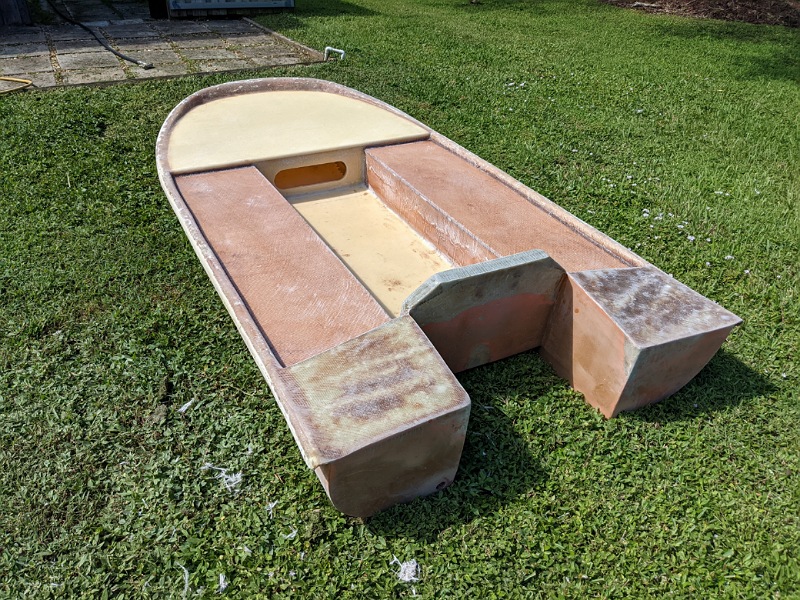 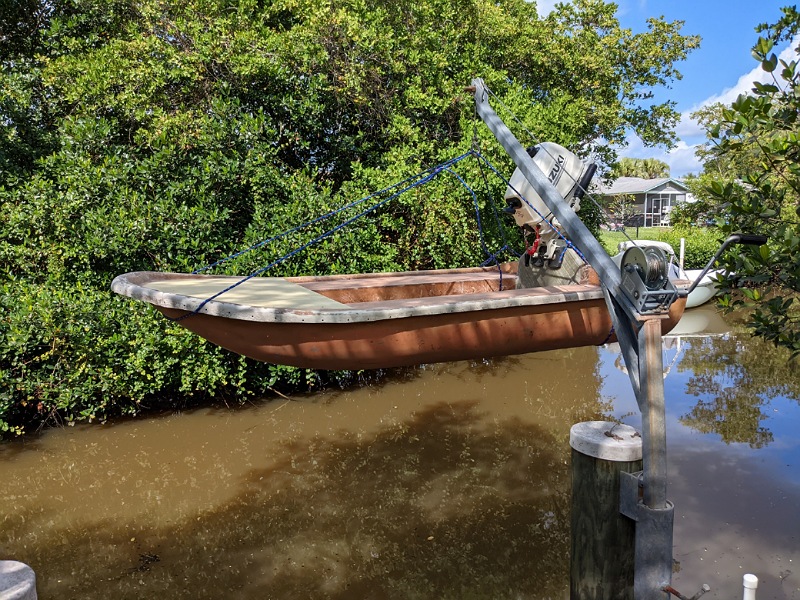 Last weekend a friend and I ran our little skiffs around Jupiter Island. Its close to 40 miles round trip. We've talked about making a race event of sorts out of this, fastest one around the island with OEM 6hp engine. He won this time, as I figured out after the fact my throttle wasn't opening all the way. The race can be completed using under 1gal of fuel! 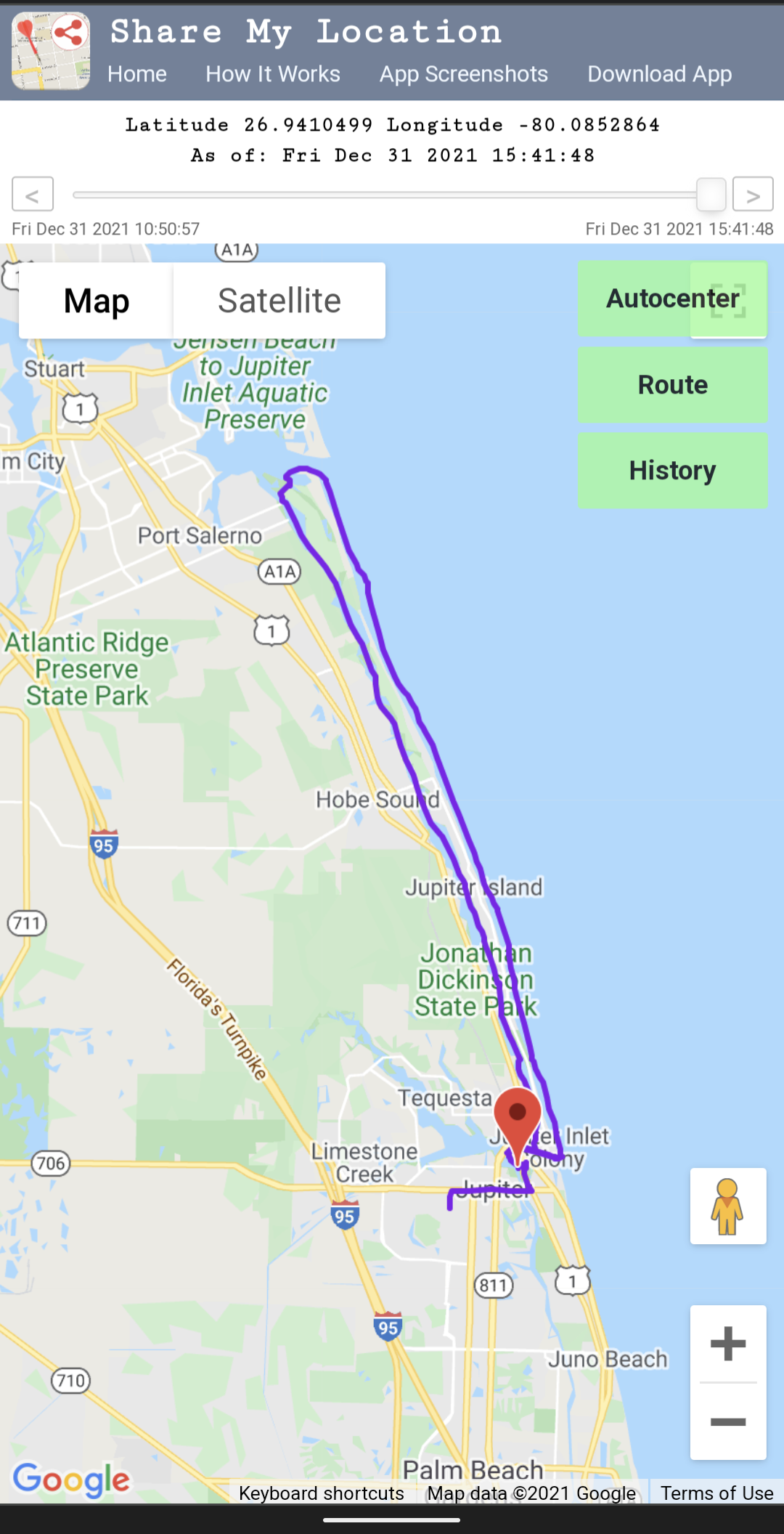 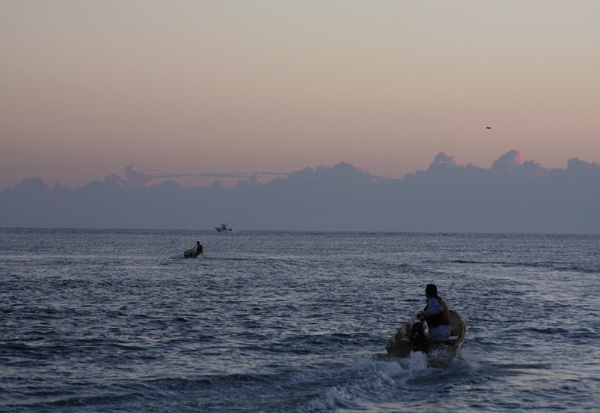 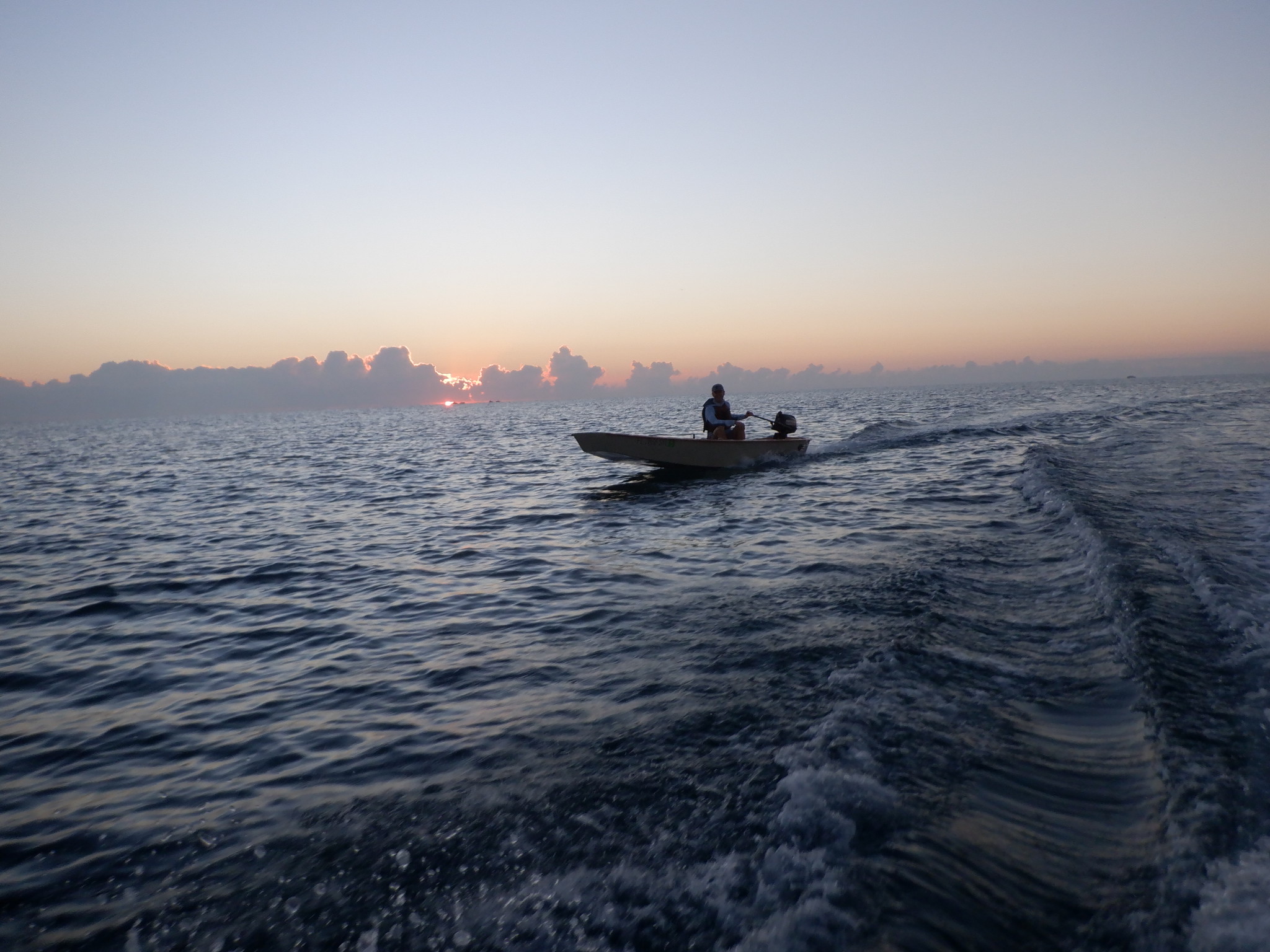 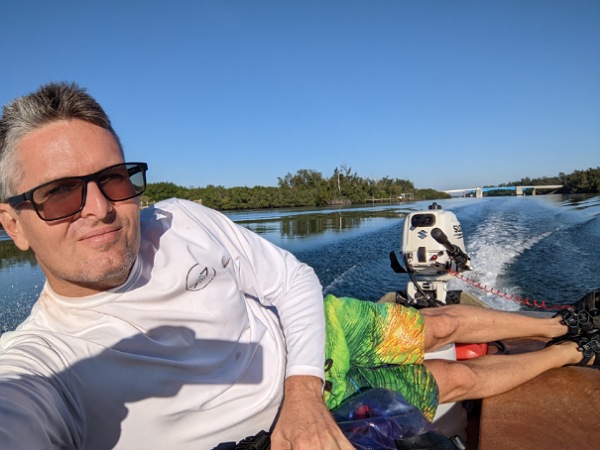 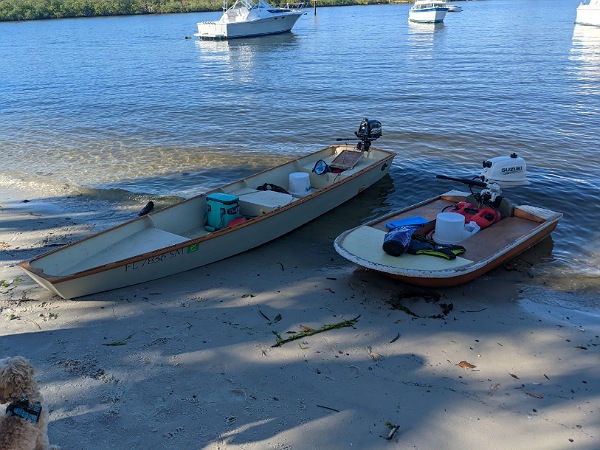 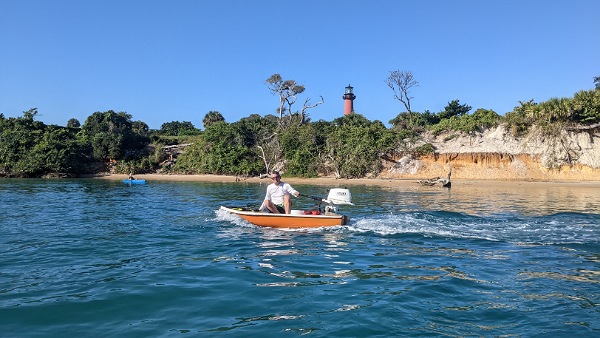 boat looks like fun! I spent a fair amount if time as a kid on those beaches.
Top
Post Reply
13 posts